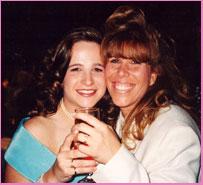 One of the greatest gifts my parents ever gave to me was the gift of having a sister. I was so lucky to have Marla in my life for 34 years…

As if it were yesterday, I can remember the phone call I received in the summer of 2001, telling me that Marla had cancer. She had found a lump in her breast about a month earlier and was very worried about it. We, her family, thought she was worrying for nothing. We had no breast cancer in our family, and a lump could be benign… Unfortunately, Marla was right.

Given that Marla was only 39, and knowing that some distant relatives (our father’s cousins) had had breast cancer, the doctors decided to test Marla to see if she had the “hereditary breast and ovarian cancer” gene mutation (BRCA). She did. What it meant for Marla was that the cancer would have a high chance of recurring in her breast(s) and/or her ovaries. When her chemotherapy and radiation were done, it was recommended she should have a mastectomy and oophorectomy (remove her ovaries). What it meant for our siblings and me is that we each now suddenly had a 50% chance of carrying this same gene mutation. Being female, if I also carry the gene, I would have up to an 80% chance of getting breast cancer and up to a 40% chance of getting ovarian cancer (which generally carries a worse prognosis). Those statistics were haunting.

I had some options, but none were great. I could opt not to be tested, and could be followed closely by a breast doctor and gynecological oncologist. In my mind this would mean that I was basically waiting to get cancer, and then would deal with it when it came, OR I could be tested. It was simple and obvious for me. I would be tested, and if I carried the BRCA gene mutation, I would have a bilateral preventative mastectomy and breast reconstruction and an oophorectomy.

I tested positive for the BRCA1 gene mutation in June 2002. Marla’s cancer treatment completed two months earlier, and her surgeries were done. She was looking great (new breasts and all), and though it might sound as if my own world were now caving in, the opposite was true. Though I was sad to have to deal with having the gene, I felt empowered with the knowledge, and strong about was I would soon do. My husband, a pediatrician, agreed with my decisions and knew where we were headed. He called my doctors and said it plain and simple “We understand that Joanne is positive, and we understand that given her options today, she has chosen to do preventative surgeries… but don’t tell us in 20 years that our daughter will have the same options.” When he hung up the phone, we knew we had to do something to help. We had to do something to give our children a better option. In addition, we had to make sure that other families would have the same type of information available to them, so that they also could understand their own risks and options. If the knowledge had empowered us to act, shouldn’t everyone be given that knowledge?

That summer (2002), Marla and I spoke a lot about her cancer, about me carrying the gene too and about our daughters. We knew something had to be done. We knew we had to help our daughters have better options. That summer, too, Marla found out that her cancer spread.

The Hereditary Breast and Ovarian Cancer Foundation (HBOC) was established in April 2003 to ensure that the tragedy that has befallen our family does not happen again. HBOC’s message is simple: BE AWARE!!. The population at large must be made aware of the necessity to look into their family histories. Families and women who are at risk of being breast and ovarian cancer gene carriers must be provided with the knowledge and resources so that they can take action. Collaborative clinical and basic science research in the field must be supported and encouraged so that the future generations are not left with the same options that I was presented with.